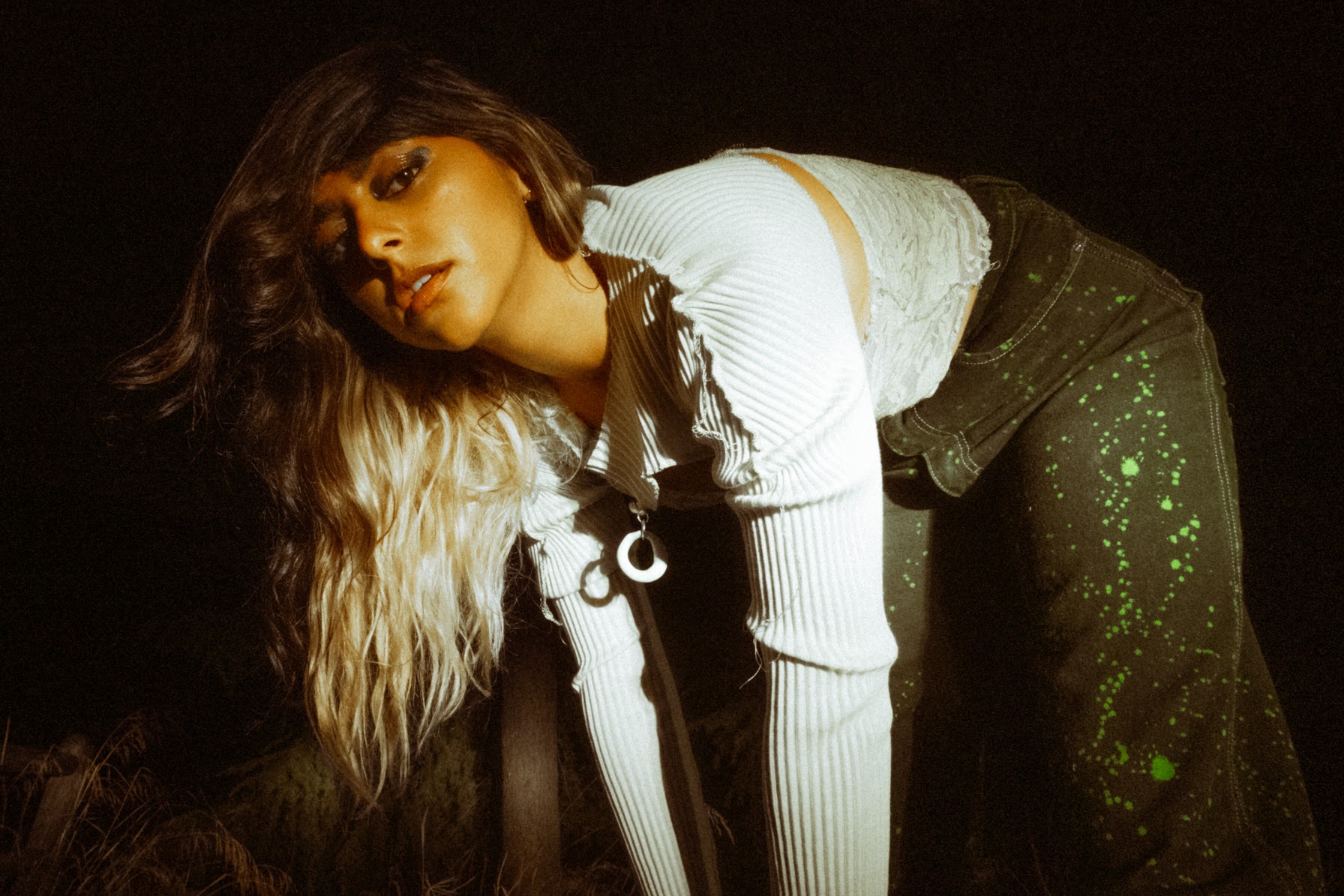 If you’ve ever experienced heartbreak you will know what a gut-wrenching experience it is. Whilst most of us would fall into all the clichés and drown our sorrows in an oversized tub of Ben and Jerry’s and mope, some talented few manage to take this pain and make it into something beautiful. The 22-year-old WENS – signed under a joint venture with R&R Records / Warner Records – has dedicated her single ‘love blind’ to all of us who have experienced a difficult breakup. We sat down with the California native on a Zoom call, and between sharing our grief about having to be in lockdown again, we discussed her inspirations, growing as a person, as well as her plans for next year.

Hi WENS, thanks for sitting down with us. Please tell us a little bit about yourself.

I’m from Los Angeles, California. I’m a California girl. I’m 22 years old (or young) – I may just still be 21 as this year doesn’t count! I’ve been writing songs since I was ten years old – I fell in love with music at a very young age. It’s very cool to be able to do something that is also very therapeutic. I don’t know what I would do without it.

You were raised in California by Iranian-Italian parents – how did you get into music?

So, my dad is from Iran and they are very much like ‘be a doctor or a lawyer’. They don’t really want you to be creative, so he was always perplexed by me. But my mum is a hairdresser, and she is an incredible singer – she inspired me to sing. I grew up going to church every Sunday and that’s where I started. She used to pay me in donuts and say “if I see you harmonizing, I’ll get you a donut after”. As a kid I was like – great! I ended up being a little overweight when I was younger because of it, but I definitely credit her. She always pushed me to surround myself with music and she was always very supportive from a very young age.

Tell us a little bit about your latest release ‘love blind’. What is the track about and what were your inspirations for writing it?

I wrote ‘love blind’ when I was in a relationship around this time last year and it was really strange. This was the first time I had fallen in love. I remember at a certain point in my relationship being like “why do I not feel like this is the same?”. Obviously as time goes by you sort of experience things as a unit and you chip away at yourself to make something work with somebody. That’s what I was doing with this person because I loved them so much. I was changing who I was to try and fit their mould of what they wanted me to be. And that’s just a recipe for absolutely heartbreaking disaster as I found out after. But yeah, so the song.. I blacked out, I don’t really remember how I wrote it, so every time I hear it still, I don’t really know where it came from. I wrote it with producer Jeff Kleinman who I was really nervous to work with because I was such a fan. We had tried a bunch of different ideas that day and we finally tried something on the piano, and I sang the melody. He said sing over this and when I came out he was like “this is great can you write lyrics to it?”. I didn’t really like it that much. And he kind of forced me and said ‘please just try’, so I wrote the first things that came to my head in like 15 minutes. When he sent me the song a few days later – I heard it for the first time back – and I was like “woah this is exactly how I’m feeling right now”. Which is so weird because I wrote it, but it felt like it came from a different part of me.

Jeff Kleinman has worked with some really big names like Beyonce, Frank Ocean and FKA Twigs to name a few. Was it an inspiring process to work with him?

It was very inspiring! I was very inspired by him as a person – I think he is great. He is pretty easy going and chill and was like “if we get something then great, if we don’t, we don’t”. It’s weird to work with someone you already know before you meet them – when you already know their work and you admire them. He had been responsible for some songs that are some of my favourites. So, it was just a cool moment to be in the room with someone like that but also at the same time them making you feel like you belong there – shout out to Jeff – he’s just a great guy.

Going back to the song, do you think that writing about your life experiences has helped you develop as an artist?

I do, I think that for a long time I was trying to find my voice and I was seeking it out in other people’s stories. I realised the most heartfelt way of my story time is actually my story. It’s a two-for-one so I get to express how I feel – it feels like a weight is lifted off my shoulders, but then I also get to say something and give a voice to other people that are going through the same thing. It’s a wild thing because when you experience something you think you’re alone in it but the reality is heartbreak – and I tend to write about sadder things – those things are very universal.

Which leads us to our next question, do you have any more music in the works reflecting on your experiences?

Lots of new music coming. All I’ve been able to do this year was make music and that’s really exciting. I’ve been kind of exploring more and taking more risks and challenging myself. I have tons of music that is going to be coming out in the new year and it is very personal. This past year I went through a breakup that has been very difficult, as well as the pandemic, so there’s a whole lotta shit to write about.

Agreed, a very universally shitty year. Good to hear you’ve had a creative outlet for this with new music coming up. So, what’s 2021 looking like?

Next month I’m going to do my first collab – I’m not going to say who it is with but it is an artist I’m a big fan of and I’m very excited for that. I’ve been very eager to work with other artists I’m a fan of so that would be cool. Also putting out some more singles! I‘ve had a few projects in mind but every other day I change my mind and so I take it one song at a time.

Would you maybe be looking to collaborate with any British artists?

Yes, I would love to. I spent a lot of time in London as that is where my ex lives. I spent a lot of time going back and forth. I miss it so much; I think about it all the time. I haven’t been since December last year. I love the music, I love the culture, there’s so much cool stuff that comes out of the UK and as soon as I can come back and it’s safe I’ll definitely be doing that.

Personal grown is directly correlated with artistic production – would you say you’ve also grown as a person as well as an artist through writing your music?

Growth is incredible but one of the most difficult parts about it is that it usually happens during the most trying and painful times of your life, I’ve realised. Growing isn’t something that feels good and I’ve sort of had to allow myself to be okay with this discomfort – growing pains when you’re a kid happen – you’re changing so rapidly and it’s hard sometimes to zoom out from yourself and pat yourself on the back; acknowledging you’re becoming a better person. So, I think I challenge myself in lots of ways to be okay with the discomfort of how it feels and especially this year it gives you the time to reflect upon yourself which has been good and bad. You have to accept your flaws and learn from them. I think all in all nothing bad comes out of growth.

What advice do you have for people reading this whom would like to embed their vulnerability into their artistry as well?

Advice I would give is it could be scary but always feels the most rewarding. For me it’s like if I can get one person commenting on something, saying that they are experiencing what it is that I’m talking about and that my song made them feel less alone, then I’ve achieved everything. That’s the goal – to have impact. You start small but it feels more rewarding knowing that it’s coming from your truth. People know when something is real and when something is fake. I think it might be stressful and make you feel anxious but in the long run it’s worth it.

Lastly, who inspires you musically?

It’s sort of all over the place. This year I’ve listened a lot to Phoebe Bridgers and Taylor Swift – I love the Folklore album and I saw she’s putting out another album and I’m really excited! When I was younger, I listened to Lorde and bands like Alt-J and Radiohead – heavily influenced by them! I think Thom Yorke is a mastermind with lyrics and I’m so baffled by him. Kacey Musgraves, Frank Ocean, it’s so all over the place!

* You can listen to WENS’ inspirations and favourite tracks at the moment in our ‘WENS Recommends’ Spotify Playlist that she’s curated exclusively for What The Funk? Magazine *

We can’t wait to see what 2021 holds for the wonderfully approachable and talented WENS. Go stream her infectious single ‘love blind’ and we’re sure you’ll be begging for more.